How council is helping koalas

Redlands Coast is well-known for its koala population living in and around our urban areas. In fact, koalas are one of the few Australian native animals that have shown they can successfully share their home with humans. Despite large areas of their natural habitat being lost to urbanisation and the associated dangers imposed by roads and dogs, you will still see koalas in all the villages of Redlands Coast and on North Stradbroke Island (Minjerribah). Interestingly, our koala population on Minjerribah are not related to the Redland Coast mainland population, but instead share a closer ancestry with koalas from the Gold Coast region! It is true our koala population has diminished over the years, but the population is still viable and breeding. Current monitoring of the koala population in Ormiston shows that our koalas are comfortable living amongst us, with mums and bubs often been reported in our regular updates on Facebook.

Steps you can take to keep koalas safe

Our Koala page has a wealth of information on koalas in Redlands Coast but if you see a koala and are concerned about its safety, contact the Redlands Wildlife Rescue Service on 3833 4031.

You may see us hanging out in the cinemas, on buses or at bus shelters during our koala awareness campaign.

The Ormiston koala safe neighbourhood project is working with the local community to reduce the threats to their local koala population. You can follow the travels of our Ormiston koalas on our Facebook page.

As you watch the koalas on Facebook you’ll discover they do travel; in fact, they can travel anywhere up to 10km, and use stepping stone trees, shade trees and food trees to help them on their way. As you can see from the map below, under the right circumstances and with the right conditions koalas could easily travel from one end of Ormiston to the other - if needed.

Ormiston koala safe neighbourhood provides a haven for the many koalas in the area. This map shows just some of the koalas being monitored as part of the current research project.

Do any of these koalas live near your property? 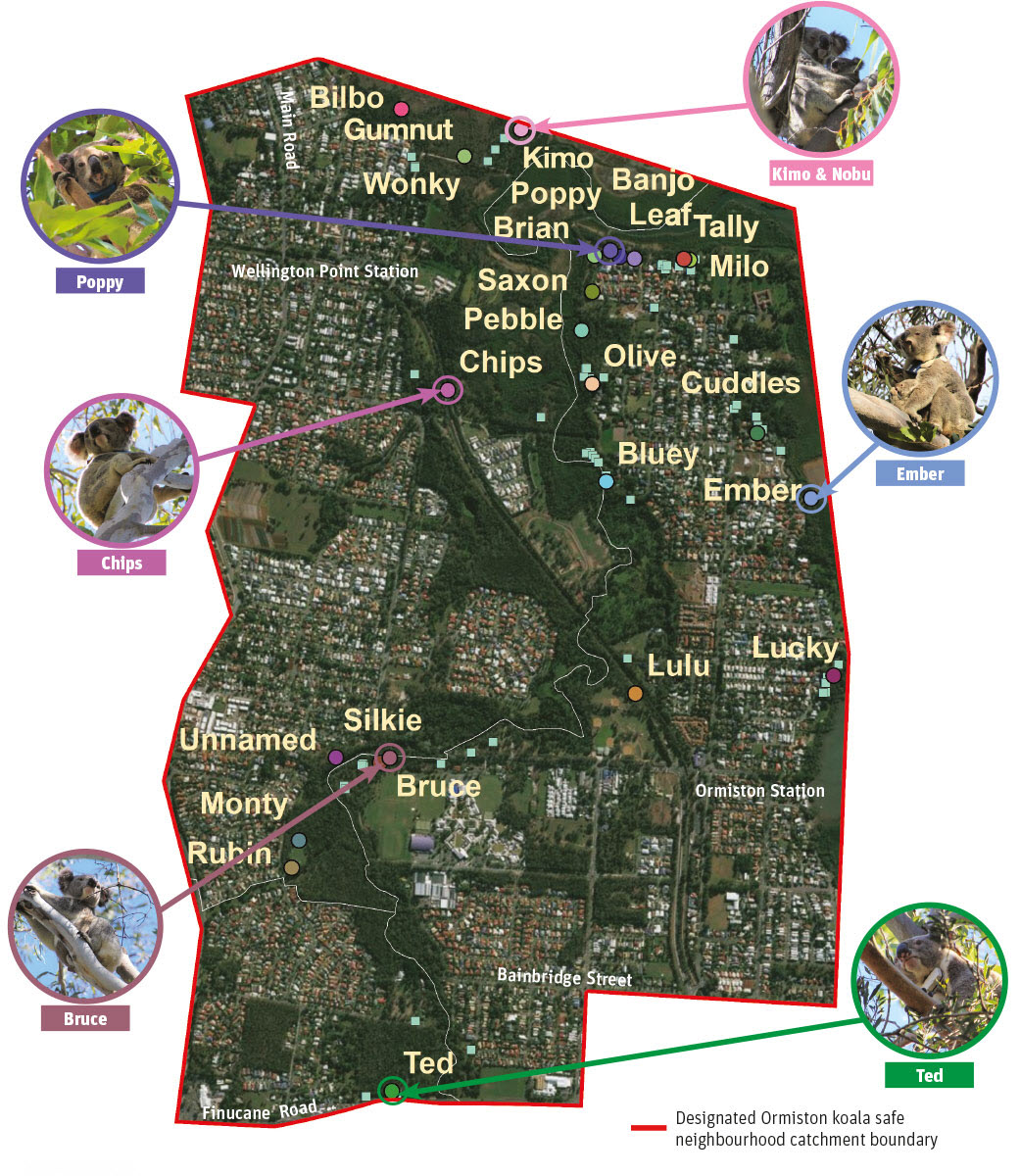 View the Ormiston Koala Safe Neighbourhood Catchment table [PDF 639 KB] for statistics about the Koalas named on the map above.

Council has a range of environmental partnership programs including the Koala Conservation Agreement Program (KCAP). The program is voluntary and free to join with an agreement running for a three to five year period. The agreement does not alter the title of the property and is extinguished at resale.

Local emerging artists in schools across Redlands Coast have created artworks considering koala conservation. Their works highlight the social, cultural, environmental and economic value of koalas to our community and where on display at Redland Performing Arts Centre for Save the Koala Month in September.

The idea of an oversized koala sculpture, designed to function as a seat, met the four key themes of the koalas in design school arts challenge. Judges agreed that a large sculpture of a koala would immediately make it recognisable, and as an iconic species people would be drawn to investigate.  The koala sculpture has been designed so its legs act as seats and judges felt this encouraged people to interact, take photos and ‘selfies’ and  would continue to send a message about koalas.  The colour scheme and patterns offered for consideration by the design team reflect both the cultural and environmental place of the koala.

Wellington Point State High School art teacher Tamara Beale and her student design team will work with an artist to bring their 'Koala Selfie' concept to life.  The Artist in Residence program is fully funded by RPAC and the artwork will become part of Redland City Council’s art asset portfolio, when unveiled in September 2020.

Individual runner up prizes were awarded to: