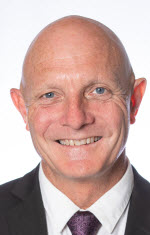 Peter Mitchell spent his early years in Belmont in Brisbane's eastern suburbs and was schooled at Iona College, Lindum. He obtained a Bachelor of Physiotherapy at the University of Queensland in 1985 and went on to a Master in Sports Physiotherapy at Griffith University in 1999.

Peter has lived in the Redlands since 1990. He has raised his family in the district, and the children attended our local schools. Peter now lives in Cleveland with his wife and one of their four adult children.

Peter has owned and operated a physiotherapy business in Cleveland for 25 years, proudly employing local staff and treating more than 15,000 residents in that time. This experience in small business has shaped a strong work ethic and great teamwork. Peter is proud that his years in business had contributed to the wider economic benefits of the city by using local suppliers and employees wherever possible.

Peter has travelled widely in North America, Asia, Africa and Europe which has given him a great perspective of just how lucky we are to live, work and play in the Redlands.

Peter is a keen supporter of seeking innovation in standard processes and the wise use of digital technology.  He has a balanced and realistic approach to practical sustainability for economic, environmental and social benefits. He has special interests in active travel, waste reduction and seeking strategic partnerships for mutual benefit.

Peter believes a healthy community is inclusive and respectful of all residents. He firmly believes in shared responsibility and that actions speak louder than words. He encourages all residents to play an active role contributing in the community.

Peter has volunteered, sponsored or served on committees for several organisations or events. These include Redfest, Redland Coast Chamber of Commerce, Sharks Triathlon Club, Cleveland Placemakers and Bushcare.

News from your local councillor

You can view the current and previous editions of Peter's newsletter to find out more about what's going on in Division 2.