Redlands Coast is home to a significant koala population, and many of them can be found in our urban areas and even in our Cleveland business district. Residents and visitors can enjoy the sights of koalas in our bushlands, parklands, street trees, schoolyards, urban backyards and in some shopping centre car parks.

Follow the links for information about koalas in the Redlands:

The koala is a type of mammal called a marsupial. This means that females have a pouch. Koalas are closely related to the wombat because both have backward-facing pouches.

They have a stout body with strong arms for climbing.  They also have very long, curves claws. Koalas have two opposable thumbs on each hand which helps with extra strong grip when climbing through the trees.

A koala's size, colouring and shape vary depending on geographic range; for example, southern koalas have thicker and darker fur and are generally larger than those in Queensland which have short, paler grey fur. Males weigh between 6-10 kilograms compared to females who are slightly smaller and range between 5-7 kilograms.

Males can also be distinguished by their scent glans, a small bare patch in the middle of the chest which is often stained brown, especially during breeding season. Male koalas can be seen rubbing their scent gland on branches and the trunks of trees to advertise their presence.

Koalas can be throughout south east Queensland. Koalas can be found all over the Redlands, especially in urban areas.

While eucalypts and other related species form the main part of a koala’s diet, food is not the only reason koalas need trees. Koalas use trees to protect themselves from the weather.

On a cool winter morning koalas can sometimes be seen at the top of a sparse tree, catching the sun’s first rays to warm up.

On a hot summer day they can be difficult to locate as they seek shade in densely foliaged trees. These might be natives like figs or rainforest trees but can even include mangos or poincianas.

Koalas have ‘home ranges’ rather than defined territories. Home ranges overlap and neighbouring koalas will use some of the same trees. Trees also form the boundaries of these home ranges. Within a home range koalas will often use the same trees repeatedly in preference to other trees. Juvenile koalas will disperse from their mother’s home range to establish home ranges of their own. Young males will travel further than females  and may have to travel some distance before they find a suitable area. During this trek they may use any species of tree, fence or power pole if they are threatened or feel unsafe.

Koalas are specialist leaf eaters, or folivores, feeding predominately, but not exclusively, on eucalypt leaves. Throughout Australia koalas are known to feed on a variety of Eucalyptus trees, as well as other closely related species such as melaleuca (paperbark), callistemon (bottlebrush), lophostemon (brush box) and corymbia (bloodwood) and casuarinas.

Koalas show a strong preference for the species that grow in their local area. For example, a Cleveland koala may not prefer ironbark leaves but for a Sheldon koala, where ironbark is common, they are an important food source.

While koalas can feed on a range of trees,these are some of the preferred  trees in the Redlands:.

Other Redlands tree species that koala will regularly feed on include: 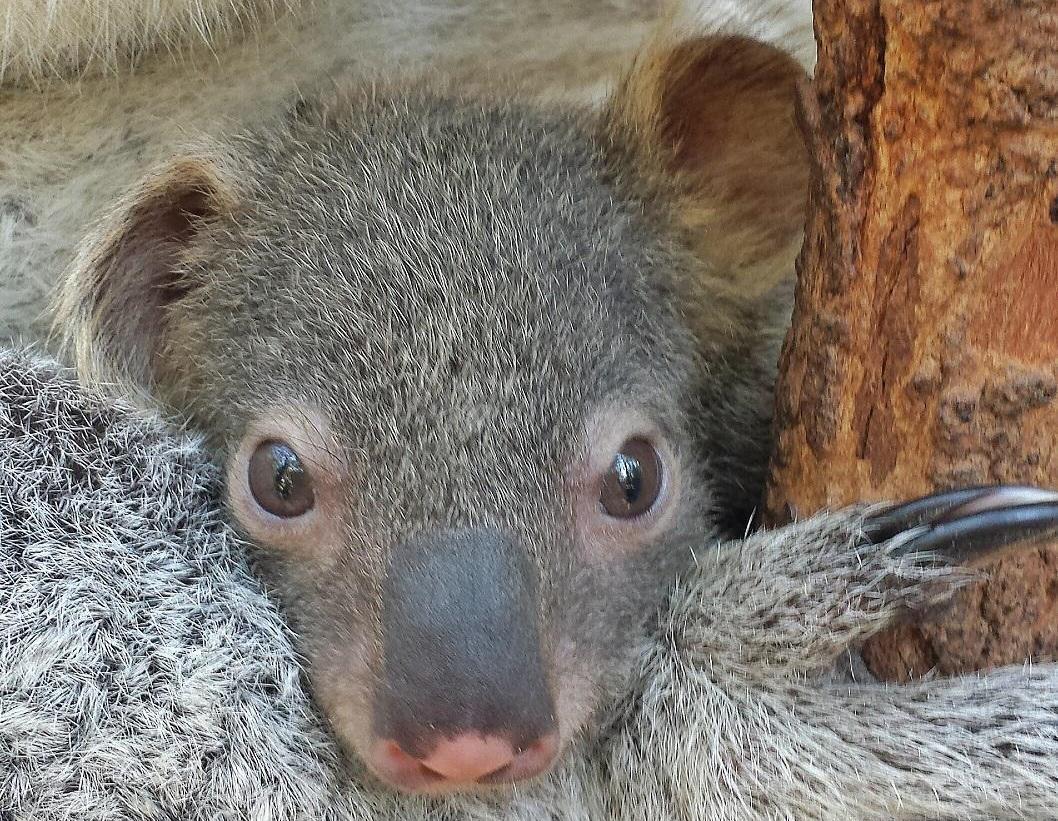 The breeding season is generally from August to December. Females are sexually mature at approximately two years of age and can produce one young per year. Twins are rare. Males breed from the age of three years.

A koala in the wild will live for approximately 8-10 years; however the average life span is often significantly reduced in suburban areas due to increased threats such as disease, loss of habitat, dogs, traffic and swimming pools.

Gestation lasts 35 days before the joey is born which is only 2cm in length and are totally hairless, without ears and are blind. After birth, the joey makes its way to the mother’s pouch where it attaches itself to one of her two teats.

The joey first emerges from the pouch after five to six months. Before the joey can eat gum leaves, the mother produces a special form of faeces, called pap. The joey must eat the pap because it provides the important gut bacteria necessary to digest eucalypt leaves.

Redland City Council is working hard to help conserve and protect koalas. Our initiatives include:

How to help our Koalas

You can play an important part in helping to keep our koalas safe.

A number of koalas are found each year with diseases such as conjunctivitis and cystitis, or injuries from dogs and vehicles.

Symptoms of a sick or injured koala include:

If you see a koala with these symptoms or behaviours, please telephone Redlands Wildlife Rescue on (07) 3833 4031

The plan recognises that despite decades of effort to re-establish a stable koala population, the latest state analysis suggests a continuing decline of 80 percent in the Koala Coast population once estimated at 6,000.

The strategy and action plan aim to guide management actions to retain a viable koala population, and conserve and manage suitable habitat both on the mainland and North Stradbroke Island. The strategy is supported by the action plan which identifies scientifically based, practical, measurable and targeted actions that are achievable by Council.

The strategy and action plan are based on four main objectives:

Council will review the implementation of the Redland Koala Conservation Action Plan 2016-2021 after the first year. It will take into account any relevant recommendations from the State Government Koala Expert Panel and feedback from the community.

Visit these websites for further details:

For more information or to talk to one of our wildlife officers, contact Redland City Council on (07) 3824 8611.