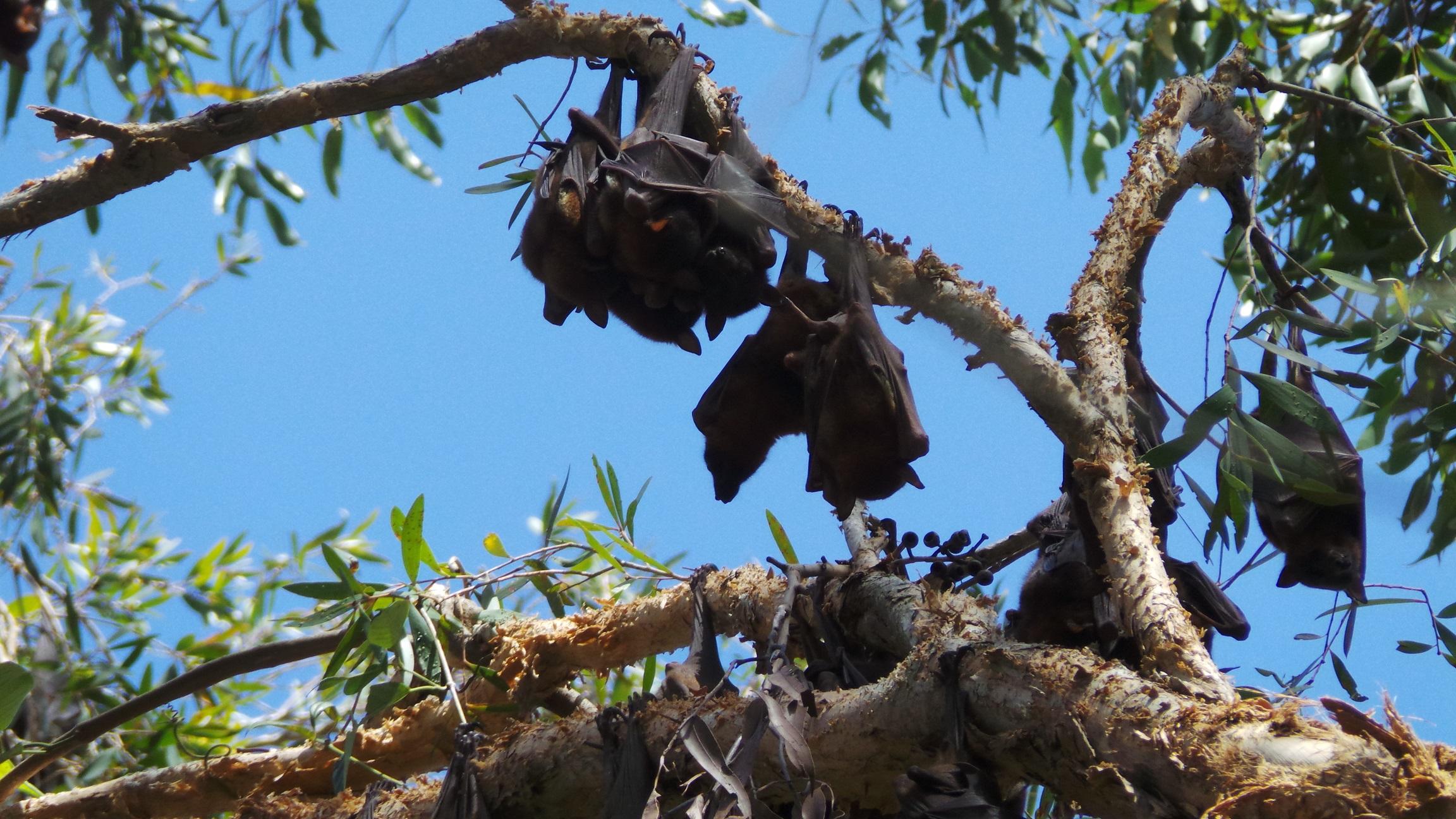 Flying-foxes play an important environmental role. They are the key pollinators of our eucalypts and are essential for the health of our eucalypt forests and woodlands. Peak pollen production in eucalypts occurs in the early hours of the morning (1am) while all other pollinators are asleep.

Flying-foxes roost communally during the day in camps or colonies, but leave the roost at night independently of each other and forage on an individual basis. These roosts provide important resting and refuge sites, as well as breeding and social interaction.

Flying-fox numbers increase temporarily during the winter months when large numbers of Grey-headed Flying-foxes arrive from across the country to take advantage of the seasonal flowering on Moreton, North Stradbroke and the Southern Moreton Bay Islands.

The Little Red Flying-foxes also arrive in large numbers from January to April. They are highly nomadic and follow the flowering of eucalypts down the eastern seaboard.

Useful tips for living near flying-foxes

What you should know

What about disease? Can I catch Hendra Virus from a flying-fox?

I have heard that flying-foxes carry rabies. Is this true and can I catch it?

Flying foxes do not have rabies. Only a very small percentage of flying-foxes (less than 1%) are infected with a disease called Australian Bat Lyssavirus (ABLV) which is similar, but not the same, as rabies. This virus can only be transmitted to humans by bites, scratches or saliva into an open wound from an infected bat. If you do not pick up or handle flying-foxes, you have nothing to fear.

Neither you nor your pets can get ABLV (Lyssavirus) from flying-foxes flying overhead, roosting or feeding in your yard or touching their droppings.

What about their droppings?

Exposure to bat faeces or urine does not pose a risk of catching ABLV. Bat droppings should be treated the same hygiene as you would with any other animals.

What is that smell?

Many people mistakenly believe that the odour from a flying-fox roost is from their droppings. The smell is actually from the male’s scent glands which, just like in koalas and possums, are used to mark their territories. This ‘scent’ is heightened during breeding season and when they are disturbed and pushed onto someone else’s branch or when newcomers arrive in the roost.

What do I do if I find a flying-fox on the ground or a sick one in my tree?

Call the Redlands Wildlife Rescue on (07) 3833 4031, they will send out a vaccinated carer to attend to the animal. Never attempt to rescue or handle injured flying-foxes.

What do I do if I get bitten or scratched by a bat?

What do I do If I get flying-fox droppings on my car? Will it strip the paint work?

Bird droppings are actually more corrosive than flying-fox faeces. To remove flying-fox droppings, it is recommended to cover the stain with a wet cloth or newspaper and leave it to soak for about ½ an hour, and then simply wipe it away. Do not leave droppings on the car to ‘bake’ in the sun.

How do I know if there are Little Red Flying-foxes in my area?

Little Red Flying-foxes arrive on Redlands Coast in large numbers between January and April. They can be distinguished from other flying-foxes by their small size and roosting habitats. The clump together in large groups and are noisier then other flying-foxes as they are continually squabbling for a position on the branch.

Each night Little Red Flying-foxes leave their roost together, spreading across the sky like a large conger line. It is a spectacular sight to see and well worth making the time to watch.