We acknowledge high-achieving members in our community who have made outstanding contributions, and have given freely of their time, knowledge and enthusiasm to promote the welfare and wellbeing across the Redlands Coast community.

On 23 January, we named the recipients of the Redlands Coast Australia Day Awards 2020.

Congratulations to the 22 finalists and all award recipients. 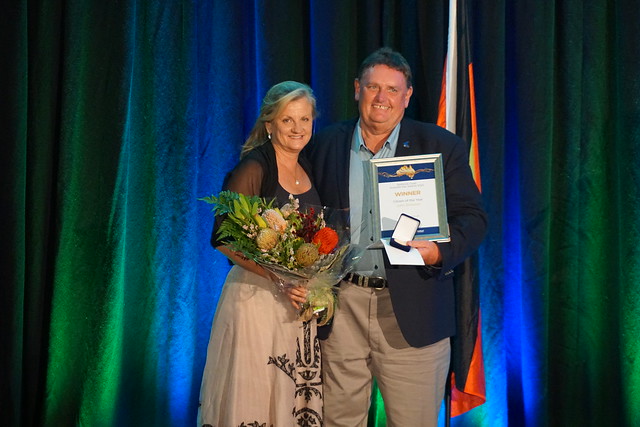 John Simpson, Citizen of the Year

John has lived on Redlands Coast for 23 years and is devoted to serving his community.

He is past president of several Rotary clubs, including the Rotary Club of Cleveland, where he is also the president-elect for 2020-2021. He is a recipient of Rotary’s highest award, the Paul Harris Fellow, for his contribution to Rotary International and his local community.

He is counsellor to the Rotary Club of Cleveland’s International Peace Fellows, who study at university in Australia and is current chairman of the Cancer Council Queensland’s annual Redlands Relay for Life event.

John is the current president of the Circle of Men’s local branch, which supports men living in the Capella Bay nursing and retirement home.

Anna transformed a 20-foot shipping container into a small yet comfortable living space for an adult and several small children, which was then donated to a Redlands Coast domestic violence shelter for women.

The Sheldon College graduate, along with her community-minded friend, Dayna Wilson, created the ‘CommCube’ accommodation which includes a bedroom/living space, kitchen and bathroom.

The project involved designing the concept, organising the construction of the project, sourcing the materials needed and managing the project to completion.

Dayna, along with Anna Sideris, created a safe, temporary house which include all the basic necessities required for those escaping violence.

The ‘CommCube’ was donated to Maybanke Accommodation and Crisis Support Service last year.

The project required strong leadership in securing the donation of the shipping container, designing the house carefully considering the requirements and sourcing materials through donations and grants.

Dayna saw the need in our local community and, along with Anna, set out to do something practical for those affected by domestic and family violence.

Janelle is passionate about helping people who are living with ill health, using her own experiences to benefit others going through tough times.

She is a long time member of Dragons Abreast Brisbane, which encourages wellness and fitness for breast cancer survivors through the sport of dragon boating.

Janelle puts in many hours to help those who have received cancer treatment and is also actively involved in the Send Me on Vacation program, which offers holidays for breast cancer survivors.

Jason Boon is Flotilla Commander of Redland Bay Coast Guard, has taken part in training exercises with Victoria Point Marine Rescue and is a member of Redlands SES.

He was recently selected to represent Coastguard Queensland on the Bluewater Taskforce water quality monitoring program.

Jason has played a major role in the rescue of distressed boaties and swimmers at sea and is a highly respected role model for younger members of the community.

Last year the Bayside Patrol Group ViPs logged more than 7000 hours of work in the local community in the 10 months to October 2019.

COOEE Indigenous Family and Community Education Centre formed in 2001 to address the education and wellbeing of Aboriginal and Torres Strait Islander young people and their families on Redlands Coast and surrounding areas.

The organisation hosts regular Murri Network meetings, which bring together service providers who are focused on assisting support programs to improve the education of young Indigenous people.

COOEE Elders regularly share their cultural knowledge and understanding with the Soroptimists of Bayside group and have been guest speakers at public events such as International Women’s Day and Women’s Voices.

Tokyo Paralympics in Adelaide in June. Paige is an ambassador for the children’s charity Variety, raising funds for families with children who have special needs, and mentors local school children to show them how sport can enhance their lives.

Team members recently toured Argentina and have become role models for their peers through their focus on fundraising to finance future sporting tours.

They have demonstrated to the local rugby community what can be done with creativity and tenacity, with the scale of their team and management’s fundraising efforts never having been achieved before.

They raised $60,000 for the benefit of Redlands Coast sport, including $10,000 through the Containers for Change program.

The event organising committee rose to the occasion, and worked above and beyond to achieve an event well received by the community.

Having seen the festival grow from only 1,000 people at its inception, it is an achievement for the Rotarians to run an event of this scale.

Peter is involved with environmental partnership programs and assists in the rescue, release and transportation of wildlife on Redlands Coast.

He began volunteering with Redland Wildlife in 2009 and has worked shifts, day and night, taking calls from the community and undertaking complex night rescues. These have included rescuing injured koalas.

Outside the service, Peter has also rescued wildlife when called upon by the Redlands Wildlife Care Network.

Layne Utz has a strong desire to keep Redlands Coast rubbish-free, developed as a child of four after seeing an old tyre in a local creek and asking his father to help him remove it.

He consistently and regularly cleans up roadside rubbish, which he then takes to the waste transfer station in his own time. Layne has attended community clean up days and environmental action events and recently spoke at a climate action day.

View photos from the awards ceremony on the Redland City Council Flickr page.

Nominations will open in October on our Your Say website.