Dams and weirs can obstruct fish from moving along waterways. Recently, the old weir on Hilliards Creek was modified and a fishway was built to free the passage of fish up and down the creek.

What is a fishway?

Fishways, also known as fish ladders or fish passes, are structures placed on or around constructed barriers (such as dams or weirs) to give fish the opportunity to migrate. The Hilliards Creek fishway is a man-made natural-looking, rock fishway where the weir was previously located.

Where is the Hilliards Creek Fishway?

You can find the fishways along the creek pathway near Old Cleveland Road East, close to Ormiston College. 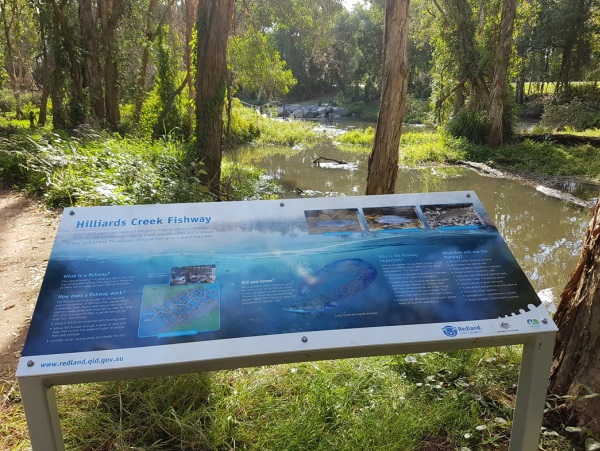 How does a fishway work?

The fishway was built to cater for the size and swimming abilities of the many fish species that live in Hilliards Creek.  Rocks were placed like a set of stairs to create pools and small falls to cater for large fish while ensuring the flow is gentle enough for small fish.

Why is the fishway important?

Barrier to fauna passage prevent fish and other wildlife from freely migrating up and down the creek to spawn, feed and seek refuge from predators.

What fish will use the Hilliards fishway?