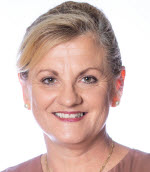 Karen Williams was first elected as Councillor for Division 9 Capalaba of the then Redland Shire Council in 2004. She was elected as Mayor of Redland City Council in April 2012 and was proud to be re-elected as civic leader in 2016 and 2020. Karen believes the Redlands Coast is the best place to live, work, learn, play and invest and is dedicated to making sure that Redland City is recognised as the jewel in the crown of South East Queensland with assets including its archipelago of islands.

Karen prides herself for her strong, caring and inclusive community focus, for being hard-working and getting the job done. Her top priorities are:

Karen is a Redlands Coast local who has lived in the city most of her life. She has raised her family here and been active over many years in the community. She offers real-world business experience having worked in the domestic money market in Sydney and Brisbane. She also owned and operated two successful retail floral studios and retains a close affinity with the business sector. Karen also holds a Diploma with the Australian Institute of Company Directors.

Karen has worked tirelessly in the community, in particular through her work for RedFest (formerly the Redland Strawberry Festival).

Karen has achieved much since her election, including raising awareness and funds to support domestic and family violence services, advocating for the Brisbane 2032 Olympic and Paralympic Games for which Redlands Coast will be an event venue city, attracting the Australian Industry Trade College to the Redlands, establishing an economic development framework and industry assistance network, ensuring that Council invests wisely in the community and turning around Council’s economic position to the advantage of ratepayers.

Karen is committed to improving the quality of life on Redlands Coast and the city’s liveability, by advocating for sustainable growth and focusing on attracting job-creating investment.

As a mother of two, and a grandmother, Karen believes in preserving the same sense of community and security she's experienced through her life in the Redlands.

The Mayor is a patron of:

News from the Mayor

You can view the current and previous editions of Mayor Karen Williams' newsletter to find out more about what's going on in Redland City.

Messages from the Mayor

Read the latest message from the Mayor and access the Mayor's message archive.