Our crest and logo 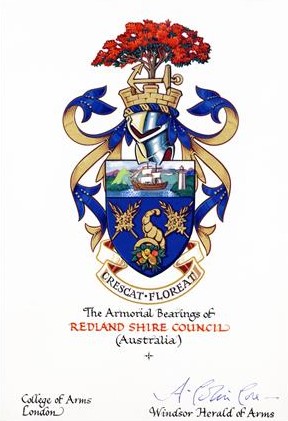 The Council Crest was commissioned in 1976, when then Shire Chairman EG Wood wrote to the Duke of Norfolk. He in turn ordered its preparation by the representatives of the Garter, Clarenceaux and Norroy and Ulster Kings of Arms, who sealed the design as belonging exclusively to Redland Shire Council (sic) on July 8, 1977.

Each section of the crest has a meaning:

This council logo was adopted in 1995 as part of Vision 2005, a community consultation process which developed a blueprint for the future growth of the Redlands.

The logo showcases the aspects of our area that Redlanders say they treasure most:

The Redlands' rich wildlife is depicted by the koala - cleverly formed from the other design elements.

The logo colours have great meaning to the local community:

Our visual identity presents a progressive and forward-looking organisation through the use of striking colours and clean, contemporary lines.