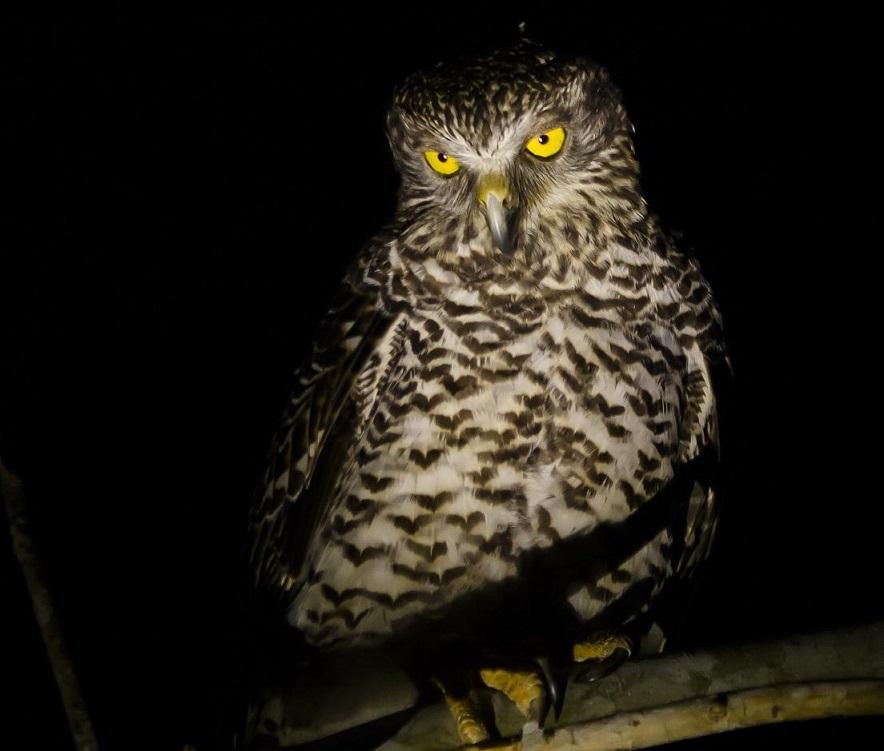 The powerful owl is a large predatory bird, averaging 50-60cm in length and with a wingspan of 110-140cm. It has a small head and rounded tail. The top of the body is mostly off-white, with numerous V-shaped grey-brown markings randomly scattered across the chest. The distinctive features of the powerful owl are its yellow eyes and feet with large talons.

Where does it live?

The powerful owl lives within a range of habitats and open forests including areas of rainforest. In order to have sufficient breeding and hunting space, individual, or pairs of powerful owls require large sections of habitat.

Powerful owls are distributed across central eastern Queensland to south-eastern South Australia. In South East QLD, they are found on the coastal side of the Great Dividing Range halfway between the mountain range and the ocean. The powerful owl predominantly nests in tree hollows found in large gum trees.

The powerful owl is protected under the Nature Conservation Act 1992. It is an offence to hurt or interfere with the powerful owl in any other way than when accepted by the Act.

Redland City Council manages environmental pests throughout the Redlands to minimise their impact on native ecosystems and birds such as the powerful owl.

The powerful owl is the largest of Australia’s owls. It is often spotted roosting during sunrise and sunset with half-eaten prey.

The owl’s diet consists of medium-sized tree dwelling marsupials such as gliders and possums.

Powerful owls require a significant preying area in order to survive and are highly sensitive to any disturbance around nests, especially during nesting periods (late autumn to mid-winter). They have been known to abandon nesting sites if the surrounding area becomes too degraded or disturbed.

Avoid known nesting sites and if you have seen or suspect the powerful owl at any location.