Create your own worm farm 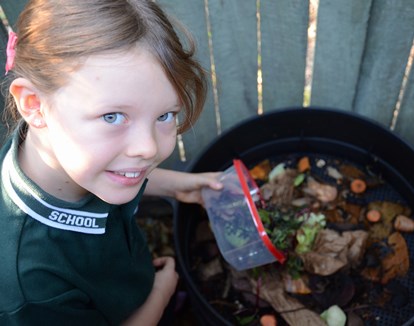 A worm farm turns organic waste such as kitchen scraps into fertiliser for your garden.

Feeding fruit and vegetable scraps to composting worms is a cheap and simple way of recycling food and garden waste. Worm castings make a great fertiliser for gardens.

Worm farms are ideal for people living in flats or houses with small backyards and for dealing with lunch scraps at the office. They don’t take up much room and can be placed on a balcony - all you need is a small, cool, well-shaded spot.

Worm farms can be bought from most hardware or gardening shops. It’s also easy to make your own worm farm out of old containers, bins, tyres or old fridges.

How to set up your worm farm

One style of ready-made worm farm housing, which is normally available from local hardware stores and nurseries, comes as a stack of two, three or four trays. The lowest tray is a drip tray (collector tray), which is then topped with the worms bedding tray and/or feeding tray (working trays).

Some hardware stores and nurseries also sell the live compost worms to go in the farm housing. They can also be purchased separately from any local worm farmer who breeds and sells compost worms.

What to feed the worms

Worms are great eaters and like most vegetable and fruit scraps, except for onions and citrus. Because worms do not have teeth, scraps should be cut into small pieces.

What not to feed them

Don’t try to feed worms food such as meat, cheese, jam, butter, biscuits, cake or any other highly processed food. They’ll refuse to eat it, causing the food to spoil and create unpleasant odours in the worm farm.

They also don’t like onions, shallots, garlic or too much acidic food like oranges, mandarins or pineapples.

No meat and dairy products should be added to a worm farm.

How to keep your worms happy

Your worms will be happy as long as you follow a few simple rules:

Worms will tolerate a temperature range from approximately 10-30 degrees celsius. If it gets much hotter than this, move the system into a shady, cool position. In very cold temperatures, cover the system with some old carpet, blankets, or hessian to keep warmth in.

Feed the worms more, it will create some warmth as the food decomposes.

Compost worms require moist conditions all year round, and do not tunnel deep to find moisture. They can only be useful in the garden if you have a thick layer of mulch in your garden.

You can never have too many worms. Worms self-regulate their population according to available space and the amount of food you give them.

Keeping a worm farm helps to reduce your ecological footprint as you reduce your organic waste from going in to landfill.

Approximately 77% of household waste going into landfill could be diverted. Composting and worm farming can remove over 50% and learning to recycle right can reduce it by another 19%.

Where to buy worms

Worms can be bought direct from commercial worm growers or through your local nursery.

How to make your own worm farm

Step 1: Choose a nice spot for your worms to live

Make sure the spot is not too hot or cold.

Old containers work well. They need to stack one of top of the other well.

Make small holes in the bottom of one box to let liquid drain and place the box with the holes on top of the other box without holes.

Make a tap in the bottom box to let the liquid drain out. Do this by poking a length of hose through one end of the box. Turn the hose upwards to turn the tap off.

Tear up some leaves, newspaper and cardboard to make a layer of bedding about 15-25cm deep. Compost or cow manure can also be used. Soak the bedding before it is added to the box.

Add about 1,000 worms to the top of your worm farm. Spread the worms out gently on the surface and allow them to burrow down.

Put your kitchen waste on top of the bedding regularly but in small amounts. Over time, as more worms breed, you will be able to give them more to eat.

Some things to remember:

Cover the worm bed with newspaper or a piece of hessian. If you are able to get a lid with the containers, put this on too. This will help keep a constant temperature in the worm farm.

Add water to the box whenever it begins to get dry. It should be the consistency of a lightly squeezed sponge; if it is too wet the worms will die.

The worm farms should be placed in a shady spot in your garden or garage.

Harvest the worm castings by moving it all to one side of the bin. Add fresh bedding to the empty side. Many of the worms will move to the fresh bedding in a few days. The valuable worm castings can then be taken out and used to feed plants, add to seedling mixes and potting soils.

In addition, the liquid which is called 'worm tea' that collects in the base or bottom container can be used as a liquid fertiliser, once it has been diluted. It should be diluted at about 1 part worm tea to 10 parts water. As your plants get used to the solution the strength can be increased.